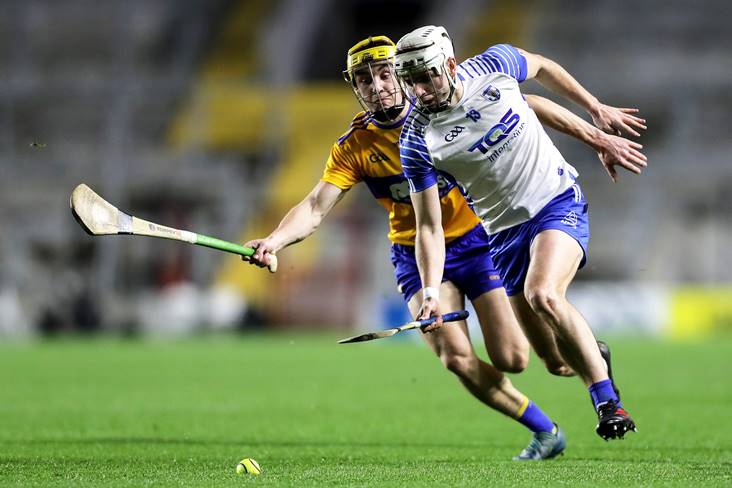 Waterford produced the second-half goods to down Clare this evening and seal a place against Kilkenny in the All-Ireland senior hurling championship semi-finals next weekend.

Dessie Hutchinson netted two goals in the opening six minutes at Pairc Ui Chaoimh, where Clare marksman Tony Kelly suffered an early ankle injury but carried on as his side fell to a second championship defeat.

Hutchinson’s goals would be cancelled out by back-to-back majors from Banner target man Aaron Shanagher midway through the first-half before Jack Fagan’s goal saw Liam Cahill’s men lead by three at the half.

The Deise went on to flex their muscle in the second-half and although they’d concede a third goal, it was the likes of Stephen Bennett, Austin Gleeson and ‘Man of the Match’ Jamie Barron that helped to translate their superiority on to the scoreboard when all was said and done.

Waterford got the perfect start to this quarter-final clash with a goal from Hutchinson inside the opening two minutes after Stephen Bennett’s initial shot had been saved by Eibhear Quilligan.

Kelly opened the Banner men’s account a minute later and they’d be level after points from Shane O’Donnell and David McInerney – the latter a terrific sideline cut - with marksman Kelly picking up a knock in the meantime which saw him having to leave the field of play.

Barron upped the Waterford lead to four ahead of Kelly re-entering the fray with his right ankle strapped up.

Kelly and Bennett traded frees prior to the former shooting over another free to leave five in it.

That would be the margin when the first water break was called and Clare would enjoy the better restart after the short break.

Within two minutes of the resumption they had the slitoar in Waterford’s net off the back of a superb move which was finished by Shanagher.

Two minutes later Shanagher repeated the trick after fielding possession superbly inside and firing a low finish that moved Clare 2-6 to 2-5 in front. 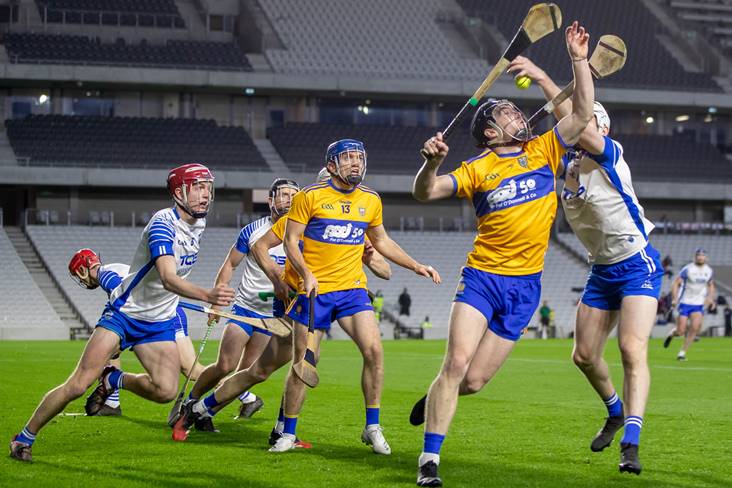 Austin Gleeson and Stephen Bennett steered Waterford back into the lead ahead of O’Donnell levelling and Clare moved in front again after scores via Shanagher and Kelly (free) outweighed one from Bennett.

Bennett’s fifth point of the evening made it 2-9 each prior to Kelly stroking over another free at the other end.

Waterford would land another hammer blow just before half-time however, with Hutchinson pulling off brilliant work to cross into an on-rushing Fagan’s path and the latter finished it to the net expertly.

Kieran Bennett’s point would leave it at 3-10 to 2-10 in the Deise men’s favour at the end of an action-packed first-half.

Stephen Bennett’s free stretched the Waterford lead to four early in the resumption ahead of sub Neil Montgomery extending it further with a fantastic solo point.

Kelly (free) and Cathal Malone struck points for Clare in response but they were struggling to contain their counterparts’ firepower at the other end.

Hutchinson and Kieran Bennett both added to their own tallies to restore the five-point lead.

Ryan Taylor pulled one back for the Banner before some brilliant defending by Malone denied Waterford a sure fourth goal and, more than likely, the match along with it.

Kelly’s fourth free of the evening was erased by a gem from Fagan in the run up to the second water break, leaving it at 3-16 to 2-14.

Waterford were really humming when Gleeson saw a superb point from the right flank backed up by Barron upping the lead to seven points with 15 minutes to go.

Clare did grab a lifeline in the most sensational fashion two minutes later when an excellent fetch and pass from Shanagher located Aidan McCarthy in space and he flashed a brilliant finish beyond Stephen O’Keeffe.

It left Brian Lohan’s charges with a four-point deficit to try and make up in the closing 10 minutes.

A Stephen Bennett free pushed the difference out to five prior to O’Keeffe pulling of a remarkable point blank save on Aaron Cunningham, who was slipped in by Shanagher.

Waterford cleared the danger and outscored their opponents by 0-5 to 0-1 in the ensuing six minutes to all but seal their date with the Cats next Saturday evening.

Calum Lyons, Stephen Bennett (3 frees) and Patrick Curran raised the Deise tally to 3-24 ahead of Cathal Malone’s third point being cancelled out by sub Conor Gleeson.

Darragh Lyons and David Reidy exchanged points in the late stages as Waterford marched on for the impressive victory to move into the last four for the first time since 2017.