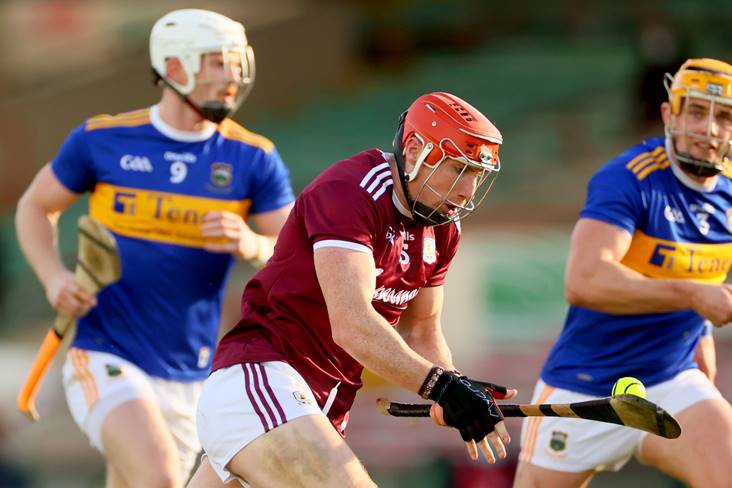 Galway bounced back from their Leinster final loss to dethrone Tipperary of the Liam MacCarthy Cup this afternoon at the Gaelic Grounds and move into the All-Ireland SHC semi-finals.

Aidan Harte’s superb goal in the 67th minute swung this thrilling quarter-final for Shane O’Neill’s side, as they overturned a six-point deficit at the start of the second-half to book their slot in the last four against Limerick tomorrow week.

Patrick Maher’s goal on the eve of half-time and points from Jason Forde and Michael Breen looked to have Tipp in a comfortable position, but the dismissal of Cathal Barrett left them with a battle on their hands for the closing 20 minutes.

Joe Canning’s frees helped to wipe away Liam Sheedy’s side’s lead and once Harte fired in with three minutes to go there only looked like being one winner.

Frees from Brian Hogan and Seamus Callanan kept the heat on the Tribesmen until the very end when Daithi Burke’s brilliant fetch deep in injury-time helped put a seal on the victory.

Callanan’s goal five minutes in had the Premier men 1-1 to 0-2 in front and points from Noel McGrath and Forde (free) had them four to the good two minutes later.

Galway responded in superb fashion with a Canning free being backed up by Cathal Mannion supplying a deadly finish to the Tipperary net on 11 minutes to square things up.

Conor Whelan found Joseph Cooney in time and space to steer O’Neill’s charges in front prior to Canning sailing over another free in the 16th minute.

Jake Morris and McGrath levelled things up but the momentum was still with the Connacht side, as Brian Concannon got in for their second goal on the 20-minute mark.

Canning (free) and Alan Flynn kept the scores flowing at either end ahead of Cooney and Mannion lashing over to outweigh a superb free from Forde.

Forde’s fourth free followed another from McGrath, making it 2-8 to 1-10, ahead of Flynn producing another equaliser in the 32nd minute.

Two minutes later and the sliotar would be in Galway’s net again, with Patrick Maher hammering home the finish after three different Tipp players had tried to rattle the net in the scramble.

Breen and Niall O’Meara hit scores in the run up to the break, erasing another Canning free and leaving it at 2-13 to 2-9 when the half-time whistle sounded. 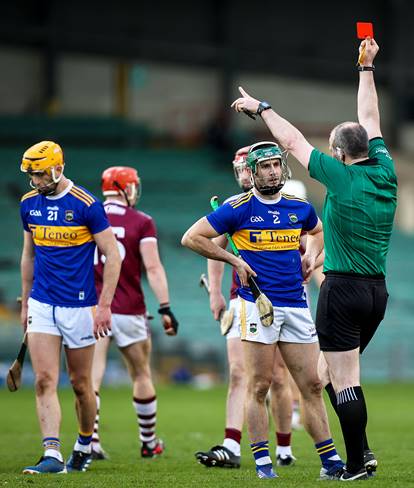 Forde and Breen fired points early in the restart that threatened to put Galway out of contention, as Tipp moved six clear and looked to be coasting.

However, the west siders responded well as Mannion and Canning (free) notched point before Whelan got inside marker Ronan Maher and drew a seventh free for Canning to convert.

McCormack shot over a gem from the left flank to move Tipp four in front again and that margin would remain until Canning struck back-to-back frees in the 50th minute, making it 2-18 to 2-16.

Two minutes later and Tipp would be down to 14 men after Barrett brought Concannon to ground and picked up his second caution of the afternoon.

Canning sent over the resultant free, which Forde cancelled out, but the Portumna great would sweep over a terrific sideline before levelling matters in the 62nd minute.

Tipp hit back via points from Willie Connors and Ronan Maher (free) but with three minutes on the clock their opponents would land another hammer blow that proved decisive.

On the break away, Adrian Tuohy’s pass found Aidan Harte and the defender flashed a sensational finish past 'keeper Hogan which surged Galway 3-19 to 2-22 ahead.

Canning stretched the lead with a free from centre-field ahead of another McCormack point at the far end.

Brilliant vision from the Galway marksman afforded Jason Flynn plenty of time to shoot over his first and on the 70-minute mark Sean Loftus boomed over to leave Harte’s goal in it in injury-time.

Tuohy dragged down Callanan, who was bearing down on goal, and Hogan’s effort on goal from the resultant free was deflected over and it would be a one-point game on 73 minutes after a Callanan free.

With their season on the line, Tipp hunted for the equaliser but it never came their way and instead Canning bombed over another free to edge his side that much closer to the last four.

The resultant puck-out from Hogan was claimed brilliantly by Burke at full-back as the Tribesmen held out for a date with Limerick next Sunday week.