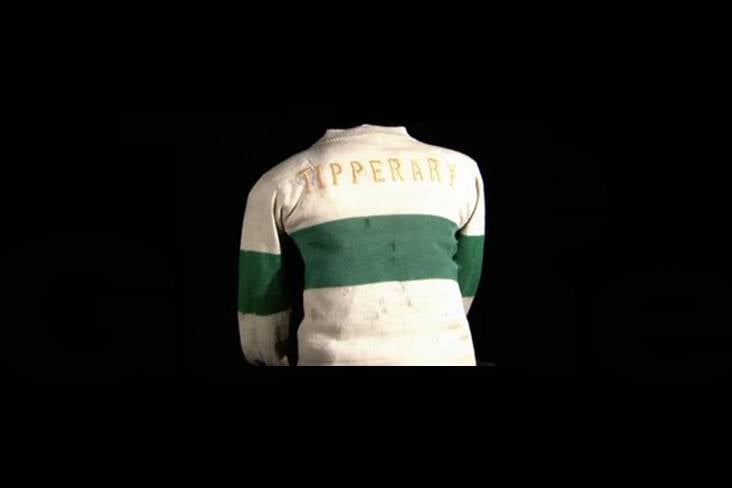 The green and white Tipperary jersey as worn on Bloody Sunday on November 21, 1920.

Tipperary GAA have confirmed that they will wear a replica green and white jersey in the Munster SFC final against Cork on Sunday week, coinciding with the 100 year anniversary of Bloody Sunday.

The Premier County, who are aiming to win the provincial senior football silverware for the first time since 1935, are to swap the blue and gold for their original county colours green and white "as worn by Tipperary on that eventful day as a mark of respect to all of the fallen."

The special commemorative jersey, endorsed by the GAA, will feature 'Tipperary' in iconic gold writing on the front instead of the logo of sponsor Teneo along with an image of Michael Hogan on the sleeve.

Bloody Sunday on November 21, 1920, is known as the darkest day in GAA history, when Tipperary footballer Michael Hogan and 13 others were shot and killed by British Forces in a challenge match versus Dublin at Croke Park.

In a statement on their website, Tipperary said: "In advance of Tipperary’s involvement in the 2020 Munster Senior Football final on Sunday week, November 22nd, Tipperary Co. Board wishes to confirm, that coinciding with the 100-year anniversary of Bloody Sunday, it is only fitting that the Tipperary team will wear the official replica green and white jersey as worn by Tipperary on that eventful day as a mark of respect to all of the fallen.

"This intention was originally announced at a press conference in Semple Stadium on February 22nd last as part of the Bloody Sunday Commemoration Day.

"Tipperary Team sponsor Teneo have agreed to forego their name on the front of this commemorative jersey in favour of the symbolic Tipperary name printed in gold across the front. Teneo Chairman and CEO and Tipperary native Declan Kelly congratulated David Power’s team on reaching the Munster Final and said he was "honoured to be associated with the Tipperary Senior Football team as we commemorate this very significant period in our history."

"No other event since the foundation of the Gaelic Athletic Association has affected our wonderful organisation so much as Bloody Sunday, a day in which Tipperary player Michael Hogan and 13 others were fatally wounded.

"The Tipperary players and management of 2020 are honoured to wear the official replica green and white jersey in this year’s Munster Final and play their part in marking this historic anniversary event."