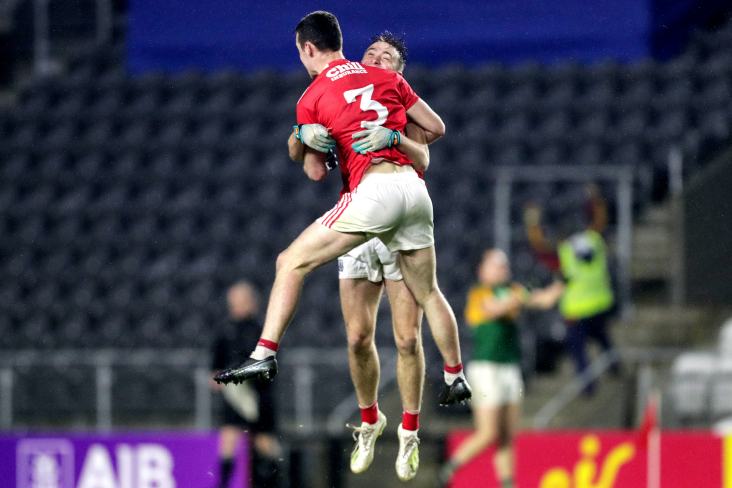 Cork's Maurice Shanley celebrates after the game with Sean Meehan

It was another enthralling weekend of championship action that saw one big upset saved for last at Pairc Ui Chaoimh...

"We give out about certain defensive stuff that we see up the country but that was a terrible game of football. It was a hard watch.”

Tomás Ó Sé didn’t hold back on The Sunday Game after watching Kerry crash out of the All-Ireland SFC to Cork.

"The minute he came back he wanted to come in and he's really added to us, and today is the icing on the cake.”

"If our shooting boots were on a bit better, particularly in the second quarter, we could have been ahead a little bit more, but overall for what you are looking for in Championship football, I thought our energy and work-rate was very strong and I would be very happy with that."

Mayo boss James Horan hailed his side’s performance against Roscommon which sees them reach another Connacht SFC final against Galway next Sunday.

"Obviously there's no doubt about it, it's disappointing. But I suppose you have to congratulate Cork. They never let us get away.”

Cork’s persistence helped them snatch a late victory against Kerry yesterday and a gutted Peter Keane congratulated them afterwards.

“We're going to have a finalist from Mayo, Galway, Tipperary or Cork. For all those teams they must sit up this morning and think, 'what an opportunity we have to get to a final' in what has obviously been a strange year.”

Oisin McConville sees Cork’s late win over Kerry as blowing one side of the draw wide open in the race for the Sam Maguire Cup this winter.

"There were a lot of high tackles there today. It's something that's very topical and one, in particular, in light of the fact there was a man on the line for Clare already, I think the officials bottled out of it. That happens. Sometimes you get them and sometimes you don't."

"He was jostling, as fellas jostle, and it was the linesman on the far side that made the call. Very disappointed. I thought the game was played in an excellent spirit with players working hard."

Clare boss Brian Lohan felt Banner defender David McInerney was unlucky to see red in the first-half of his side’s victory against Laois.

"I got a great 37 years out of that goal and I got a lot of mileage out of it. If Mark can get a fraction of that he will be doing very, very well. Sunday was his day and I'm delighted for him."

"We got a couple of scores at vital times and I'm just delighted - it was all about the result today, more so than the performance."

"We knew they were coming in hot so we knew it would be a tough physical battle, our lads stood up to it and it gave us a good sense of where we're at."

Kieran Kingston hailed his Cork players after rebounding from the Waterford loss with a convincing victory against Dublin on Saturday.