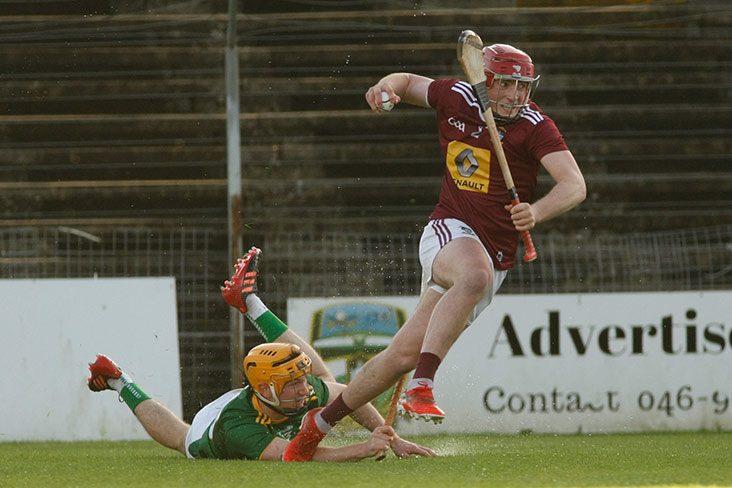 Meath put up a brave showing in this engrossing Joe McDonagh Cup round four clash at Pairc Tailteann on Saturday before Jack Regan's harsh dismissal in 54th minute turned the tide Westmeath's way.

The scores were tied at 1-15-each when Regan was sent off. Westmeath outscored the home side by 1-5 to 0-4 over the remainder of the game.

Sub Luke Loughlin netted the decisive goal in the second minute of added time before top scorer Aonghus Clarke completed the scoring with a brace of points (one free) to secure a first win of the campaign for Westmeath.

That brought Clarke's tally to eight points (two from play) to secure Westmeath's first win in the campaign and leaving Meath searching first their first win in a Joe McDonagh Cup game.

Meath lost goalkeeper Mark McCormack to a 62nd minute injury with the home side still leading.

The breeze blowing towards the town goal favoured Meath in the first half. They were first to show when Padraig O'Hanrahan's effort rebounded off an upright for Adam Gannon to point the home side in front inside 66 seconds.

O'Hanrahan (free) doubled Meath's lead before Westmeath pointed twice in quick succession to tie the scores for the first time five minutes in. An Alan Cox point on the run was the pick of the early scores.

Points from Gannon (two) and Jack Walsh moved Meath 0-5 to 0-2 clear by the 11th minute. Westmeath erased the deficit with a Shane Williams goal with assistance from Niall Mitchell.

That levelled matters for the second time. Westmeath were on a roll and moved two clear through Robbie Greville. Meath responded well to level matters for the third time with an Alan Douglas point.

Meath upped their game either side of the water break. Jack Regan's pointed free from inside his own 65 left Meath 0-8 to 1-4 ahead at the mini-break.

The high point for the home side in this phase came in the 29th minute when an O'Hanrahan delivery from inside his own 65 wasn't managed by the Westmeath defence and Jack Walsh goaled.

Meath went five points clear twice over the remainder of the half. Points from Aonghus Clarke (free) and Niall Mitchell improved matters for Westmeath before Stephen Morris sent over to leave the Royals 1-12 to 1-8 to the good at half-time.

Meath fended off Westmeath's third quarter challenge until two Clarke points in quick succession levelled matters. Meath weren't done for after Regan's dismissal with points from Walsh and O'Hanrahan (free) boosting their cause. They held that lead in the 67th minute before the Lake County finished stronger.

The round robin stage of the competition will be completed next Saturday when Westmeath entertain Carlow and Meath host Antrim.