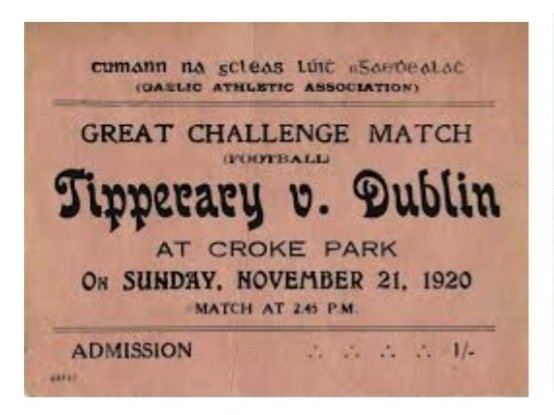 To mark the 100th Anniversary of Bloody Sunday, GAA clubs all over Ireland are going to light up their grounds and fly flags at half mast on Saturday 21 November.

💛LIGHT UP SO WE NEVER FORGET💛
⚪️Saturday 21st November 2020⚪️
Clonduff Park will light up our grounds, and fly our National flag at half mast, from 19.20-20.20pm in memory of those murdered in Croke Park on Bloody Sunday, 100 years ago.#lightupsoweneverforget#thegaaremembers pic.twitter.com/WuKHFf7jQ5

On Saturday Páirc Uí Bhriain will light up to honour the 14 victims killed by Crown Forces on Bloody Sunday 21/11/20. It was a defining moment in Irish history,yet little was known about the individuals who went to that football match but never came home. #B100dySunday #GAABelong pic.twitter.com/AbmhBHb5RA

Saturday marks 100 years since the killings in Croke Park on Bloody Sunday.

The GAA Community are also asked to mark the day by lighting a candle at dusk. #B100dySunday pic.twitter.com/9zSlcN5rP5

Naomh Conaill CLG will be lighting up Davy Brennan Memorial grounds on Saturday night from 19:20 to 20:20 to commemorate the 100th Anniversary of Bloody Sunday

We are asking our members to light a candle at dusk this Saturday 21st November pic.twitter.com/e6qDEup7tl

Fr Brendan will give a blessing in remembrance of the people that lost their lives on that day#B100dySunday pic.twitter.com/BF8srdKEyC

Errigal Ciaran will light up Dunmoyle & Ballygawley PF on Saturday evening from 19:20 to 20:20 in remembrance of the 14 people murdered on Bloody Sunday and those families affected. We also encourage Gaels to place a lighted candle in their windows. #GAAfamily pic.twitter.com/bFUHrlZTeY

The GAA Community are also asked to mark the day by lighting a candle at dusk. #B100dySunday pic.twitter.com/PpNil1Op3L