"It was just a rollercoaster of a game" - Rabbitt 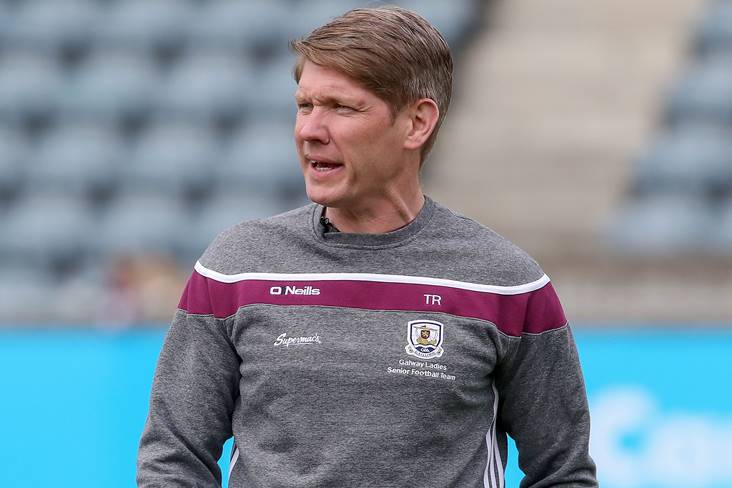 Galway had to hang on in the end, but Lynsey Noone’s late goal made sure of their spot in the TG4 All-Ireland Senior Championship Semi-Final, much to the relief of their manager Tim Rabbitt.

Cork will be Galway’s opponent in the last four, a game that will now take place on Sunday 6 December after the LGFA re-fixed the game to accommodate Cork’s dual players.

Galway’s progression looked in doubt in the closing stages after Ellen McCarron twice goaled for Monaghan, but Galway, who had Fabienne Cooney sent-off before half time, held on for the win, much to the delight of Rabbitt.

“My overall emotion is just pure pride in how hard they battled, because the game could have went away from us at different times,” said Rabbitt.

“It was just a rollercoaster of a game and we are very proud of the girls’ performance today.

Look, Monaghan are a really good team and there is no getting away from that.

“We knew they would bring that sort of battling performance and they certainly brought a lot of physicality to it, as well as everything else. So, we are really proud of the character our girls showed because when they had to battle.”

Cork’s win was secured in a more measured fashion as a hat-trick of goals from Áine Terry O’Sullivan and two more from Saoirse Noonan helped Ephie Fitzgerald’s side to a 7-9 to 2-6 victory.

Cavan threatened early on and led following Lauren McVeety’s penalty, but Cork soon took charge, and Fitzgerald knows they need an improvement ahead of the semi-final.

“Galway are going to be a tough side to beat so we know what we are up against, but we have three weeks now to get ready for that one,” said Fitzgerald.

“We started well and the early goals settled us, but then we got a bit sloppy for a few minutes. But we settled again and once we did always felt we were in control. We are delighted to be into the semi-final.”

Armagh manager Ronan Murphy admitted Dublin will pose an altogether different challenge for his team after they swept past Mayo to claim their spot in the knock-out stages.

A powerful defensive performance was complemented by Armagh’s rampant forward line, with Aimee Mackin’s 2-7 key to their win over the Connacht side.

Armagh and Dublin will clash in the All-Ireland semi-final in two weekends’ time – a repeat pairing of Armagh’s last visit to the last four in 2015 – and Murphy knows his side will need to improve against Mick Bohan’s champions.

“Dublin will be a different kettle of fish but we are looking forward to it. We haven’t even thought past Mayo today but certainly tomorrow we’ll get a look at Dublin,” said Murphy.

“It was a great performance. Everybody really put the shoulder to the wheel and they tackled really hard. We knew if we could get the ball up front we would do damage with the forwards we have. Really, it was a great team performance.”

In the only dead rubber of the weekend in the Senior Championship, Maxi Curran’s Donegal ran out convincing winners against Waterford. Donegal made early inroads thanks to goals from Karen Guthrie and Geraldine McLaughlin and Curran’s side ended their season with a stylish win.

“Nobody knows what’s around the corner. We put a lot into this campaign and we had high hopes but it didn’t work out for us,” said Curran.

“It’s the end of the campaign and that’s what it is for us and we’ll treat it like that.”

In Sunday’s TG4 Intermediate Championship, all the excitement centered around Group 4, where Clare emerged as pool winners thanks to their 7-18 to 0-2 win over Sligo, while Kildare slipped up against Laois.

In the end Clare, Kildare and Laois all finished on six points in the pool with two wins each – eight points from Mo Nerney helped Laois defeat Kildare – but Clare’s comprehensive win over Sligo improved their scoring difference, where a hat-trick from Amy Sexton was vital.

Meath will be Clare’s opponents in the semi-final, and after the Royals had made sure of their qualification last week, Down edged past Leitrim on a 3-12 to 1-10 scoreline in the only Group 3 game of the weekend.