What they said … the football weekend in quotes 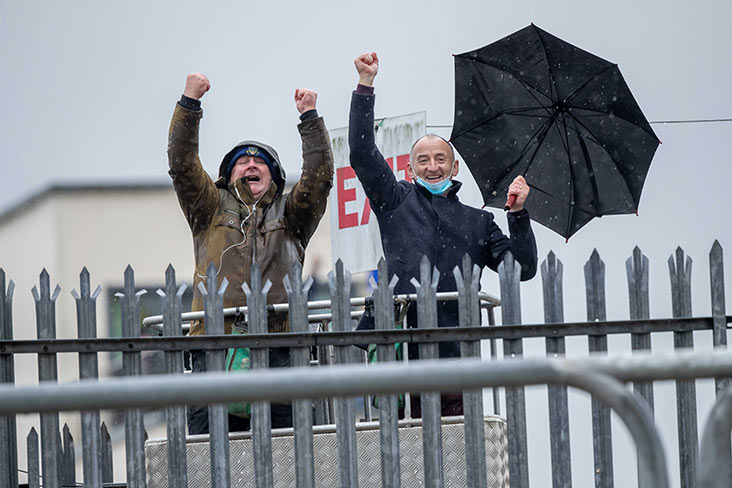 Two Donegal supporters get a view of the Ulster SFC clash with Tyrone from outside the ground at MacCumhaill Park, Ballybofey.

“I haven’t considered anything about that just right now.”

Mickey Harte’s future as Tyrone senior football manager is under the spotlight following the Red Hands’ loss to Donegal.

“The goal we conceded was a poor goal, from a mistake, but I thought the response immediately after that was terrific but I think over the 75/76 minutes I felt we were the better side.”

Donegal supremo Declan Bonner masterminded a 1-13 to 1-11 success over Harte & Co in Ballybofey.

“Maybe today we can put this myth that Armagh can’t play against blanket defence. That was a blanket defence today and we scored 17 points in atrocious conditions.”

"The momentum is there. There is no pressure on us going to Portlaoise next Sunday playing Kildare and we’ll give it everything we have."

After watching his Offaly team see off the challenge of Carlow, John Maughan switched his focus to the Lilywhites.

“At the end of the day, none of us get anything in life unless you work hard but that’s what the lads are producing, that’s the reason we’re winning games, but we know we’ll have to find improvement ahead of next weekend and whatever lies ahead in 2021… but there’s no substitute for winning games.”

Billy Lee’s Limerick finished with 11 points to spare over Waterford.

“We know this is only game one of the championship. Munster semi-final next. Limerick are there waiting for us.”

A place in this year’s Munster SFC final will be up for grabs when David Power’s Tipperary outfit lock horns with the Treaty County.

“We have a huge amount of work to do. They are the Division 2 champions, it’s in the Hyde. I’m expecting a huge challenge for them.”

Mayo’s reward for their 2-15 to 0-10 success over Leitrim is a semi-final date with reigning champions Roscommon and James Horan is well aware of the threat that Anthony Cunningham and his team will pose.

“We are a team on the up. That’s what we want to believe. Are we Division 1 or 2 standard? No. We’ll get our eyes opened next Sunday. But at least we can see where we are.”

“Sam scored everything today. It’s probably something we need to improve.”

Louth’s over-reliance on full-forward Sam Mulroy is a cause of concern for manager Wayne Kierans.

"It's a gut-wrenching defeat for us. It was a game in normal time, we should have been able to win it.”

Seamus ‘Banty’ McEnaney and Monaghan made their exit from the Ulster SFC on home turf.

"If you want someone with a bit of steel coming into the last kick of the game, Raymond, he showed no nerves. They did everything to try and distract him but he kept his nerve. And what a kick and what a way to win a game."

“Both teams in fairness put in a huge shift. There were mistakes on both sides, indicative of just not having played competitive football but nobody could fault what both teams gave out, and maybe Donegal are unlucky not to come away with a little bit more.”

Mick Bohan’s All-Ireland champions Dublin were pushed all the way by a determined Donegal in Kingspan Breffni Park.

“It’s a massive game. I won’t lie, it’s a do or die game. If we win we are through to an All-Ireland semi-final and that’s the way we are going to be approaching it.”

The stakes couldn’t be higher for Kerry manager Declan Quill and his players ahead of their local derby against Cork next weekend.