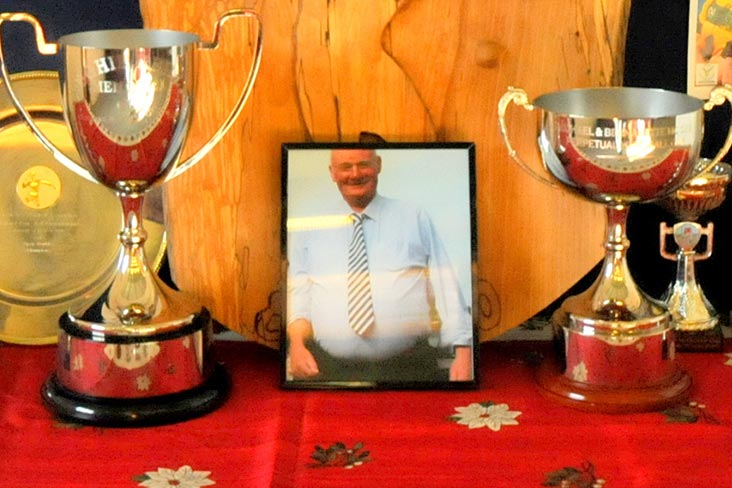 The 5 team competition comprising of 2 doubles and 1 singles up to 31 aces format. The contest started at 12 noon and first into action was Crossakiel doubles pairing of Vinny Farrell & Michael McGee against Kells Danny McGovern & Mark Farrelly. The opening exchanges was close enough but thereafter Farrell & McGee hit the front and could not be caught. In the end it ended 31-13 giving Crossakiel a healthy lead.

In the singles was Crossakiel's Mark Farrell facing the ever improving Keith Blackburn.  Farrelly started slowly with the opening exchanges shared. However it could be seen from early on once Farrell went through the gears it was only going to be one result. Blackburn  is a very capable Junior C player and much is expected of the Kells players in the next couple of years. Farrell on the other hand is  that little bit more experience and he used this to telling effect once he opened up and began to express himself.  Farrell this years Leinster semi-finalist fired into an 14-5 lead and then assumed control reeling off 12 more points without reply and going well out in front by 26-5. Blackburn to his credit never gave up and made a mini revival but to to avail as Farrell finished with aplomb winning comfortably in the end by 21-10. Before the second doubles match. Mark & John Farrell put the Club' Juvenile starts through their paces with a a training session.

The much eagerly awaited second doubles match with Crossakiel's Steven Quinn & John "Boy"Molloy facing the formidable Kells pairing of Anthony McConnell & Joe Cummins. With the Reilly Cup already secured the match was a formality but the Kells men went in search of a first win of the day. McConnell the Master was a revelation on the day and hardly put a foot wrong, nothing past him on  the left and no matter what Quinn & Molloy threw at him he was equal to it.  Cummins to on the right lofted many high lobbing serves into Quinns left corner asking questions of the Crossakiel player. Kells took the first game all to easily by 21-6. In the second it was a lot more closer.   Quinn & Molloy played much more coherently but still McConnell & Cummins could not be caught and ran out deserving winners by 21-13.

Just before the presentations Club Chairman Steven Quinn thanked all players for the "good standard of handball  and was very proud of his Crosakiel players. It was a special year with the Cup played in Hughie's memory."  The Chairman was very pleased with the overall organisation of the well run event.  Kevin Reilly on behalf the the Reilly family said "it was a great pleasure to attend and make the presentations. He said his late brother would have been proud  & delighted.  He was delighted to see all the young players in action along with the Crossakiel & Kells Players and thanked the organisers for their hard work."   With the speeches over Kevin Reilly presented the Hugh Reilly Memorial Cup to Captain Vinny Farrell.  It was a special moment for the club to win the inaugural cup and to have it resting in Crossakiel for the next year..