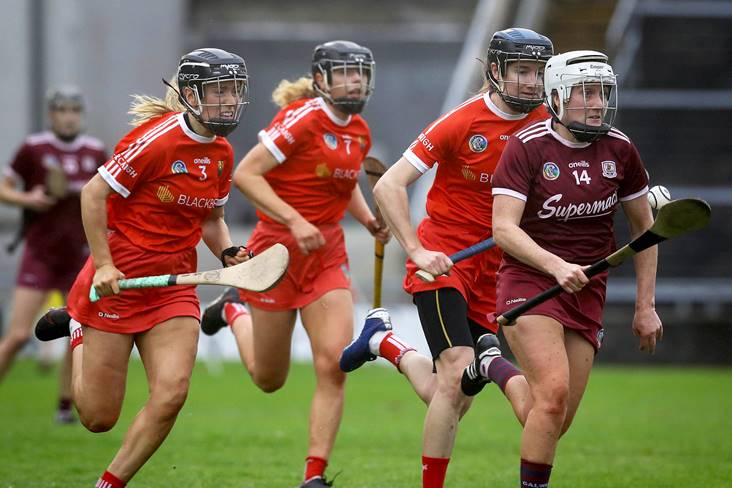 Cork manager, Paudie Murray will have seen more than enough to be pleased about however, as his squad now turn their attentions to taking on Group 3 runners-up Clare in the first of two Quarter-Finals at Páirc Uí Chaoimh (1pm), which will be televised live by RTÉ on Saturday.

Elsewhere, Waterford assured themselves of a place in the knockout stages by virtue of their 2-17 to 0-10 win over Westmeath at Cusack Park, Beth Carton providing a staggering 1-14.

Kilkenny, who accounted for Limerick by 2-16 to 0-8 at UPMC Nowlan Park, had already booked their last four berth as Group 2 victors.

Galway led by double scores at the interval, by 0-10 to 0-5, but had a very early let-off when conceding a penalty with just a minute elapsed, awarded for a chop on full-forward Amy O’Connor. Chloe Sigerson did not get enough on her strike however and the ultra-reliable Sarah Healy made a smart save.

Sigerson was accurate from two frees and Orla Cronin another after Carrie Dolan had scored for Galway, to give Cork an early lead but following the water break, Galway began to get on top to neutralise the early threat of the Rebels’ inside attacking division.

They had achieved parity by the time Hennelly cut her first sideline stroke from 40m out on the left, and the Ardrahan star’s ability from the discipline was certainly significant, as she repeated the trick from 46m on the right. Dolan and Orlaith McGrath were also on the mark to stretch the margin at the break.

Cork cut it to two very quickly, Sigerson lofting over a free from inside her own half, Hannah Looney following up immediately after driving forward from half-back and Cronin pointing another placed ball.

Cork continued to battle hard and got it back to within three again but it was Hennelly’s heroics that proved definitive.

It was The Beth Carton Show in Mullingar, the prodigious sharpshooter adding nine points, two from play, to Lorraine Bray’s opener to give Waterford a 0-10 to 0-3 interval advantage.

Westmeath have already left their stamp on a maiden Senior campaign with their opening round triumph over Limerick and they showed all their grit and guile to cut the margin to four, Pamela Greville bringing her tally to six pointed frees by the 47th minute.

Carton snuffed out the danger with a goal two minutes later though, and Niamh Rockett shook the rigging in injury time for the coup de grace.

Second-half goals from Aoife Doyle and Denise Gaule allowed Kilkenny to pull away from Limerick, who brought plenty of grit but could not match the firepower of the Noresiders, who also had Anne Dalton and Katie Nolan showing prominently.